INDIANAPOLIS — It was supposed to be “work” — an interview with arguably the most famous driver in the TUDOR United SportsCar Championship, to provide publicity for upcoming races in the series.

It ended up just being a friendly conversation between two enthusiasts about cars and racing that happened to occasionally touch on the preplanned talking points. 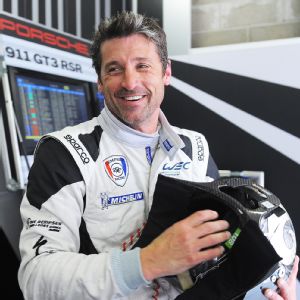 I shouldn’t speak for Patrick Dempsey, but that’s what it was from my perspective. Dempsey, fresh off the plane from Germany after participating as a guest driver in the Porsche Supercup support race during the Formula One weekend at Hockenheim, chatted amiably for about 20 minutes, and it was obvious from talking to him that his love for and knowledge of car racing is all-consuming.

The man known to most Americans as Dr. Derek “McDreamy” Shepherd from the television drama “Grey’s Anatomy” is a passionate and serious racer. This year, between acting commitments he’s contesting as many races as possible in a Porsche 911 in the TUDOR series’ GT Daytona class.

In June, he also competed in the 24 Hours of Le Mans for the fourth time, finishing fifth in class teamed with his friend/manager Joe Foster and Porsche factory driver Patrick Long. It was Dempsey’s fourth Le Mans start, and 24th place out of 56 starters represented his best overall finish in the 24-hour classic — though he and his teammates just failed to match their fourth-place class finish from 2013.

The effort that went into Dempsey’s 2013 Le Mans program was documented in a four-part series that aired on the Velocity network titled “Patrick Dempsey: Racing Le Mans.” While researching the project, Dempsey gained a greater appreciation for the distinguished group of actors preceding him who found a sanctuary in racing, including Steve McQueen, Paul Newman and James Garner.

“My favorite part of the documentary was the archival stuff, looking at how they developed as drivers,” Dempsey remarked. “Paul Newman’s approach was really sane in the sense that he started off really quietly, just pounded around and pounded around until he got comfortable, and then did some local club events and worked his way up. I jumped right into the deep end right away, and sometimes I think maybe he had the right idea! But in terms of a sustained career and quality driving, he is the benchmark.

“Had McQueen been able to race more, I think he could have been incredibly competitive,” he continued. “He did place second at Sebring, so he did quite well there, and Newman was second at Le Mans. To be mentioned with those guys is a tremendous honor. I’m working on my own legacy, and hopefully I earn the right to be mentioned with them.” 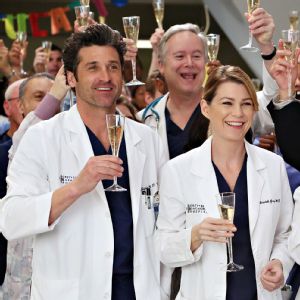 “If anybody has been to that event, he catches the essence of the experience,” Dempsey asserts about “Le Mans.” “There’s no narrative to the movie itself, but you capture the event and that era of racing so beautifully on film. In ‘Winning,’ you see all the different types of cars from that generation as well, and the Indy 500 at its peak. Indianapolis is a magical place. I was fortunate enough to drive the pace car one year and I value that ring profoundly.

“There’s that funny story where McQueen went in to have the meeting [for ‘Grand Prix’], and [director John] Frankenheimer wanted McQueen,” he continued. “But for whatever reason, Frankenheimer wasn’t in the meeting; the producer was, and I don’t know what happened in the meeting between McQueen and the producer, but at the end of it, McQueen got kicked out and Garner got brought in. What would that movie have been like had McQueen been in it? Then he goes ahead and makes ‘Le Mans.’ “

Dempsey makes no bones about the fact that he doesn’t care much for NASCAR. He’s a road racer through and through, particularly loyal to sports cars.

“Richie Ginther, Dan Gurney and all those young Americans who went over to Europe to race after the second World War were real trailblazers,” he said. “It’s a shame we don’t have any young Americans who want to go over and do that. We’re swallowed up by NASCAR. There are a few young guys coming over and racing in Europe for Porsche, and to me, if I was a young man, that’s where I’d be racing, to be part of that heritage.

“That’s what I like about the TUDOR Series — going to tracks like Watkins Glen, Road America and Road Atlanta,” he added. “Those tracks were all developed by the SCCA after the second World War, and those are the classic tracks that are really fun to drive. You feel that history and that sense of soul in those tracks.”

Dempsey hopes to share his enthusiasm for his favorite era of American involvement in international motorsport with a project he has in development for the Sundance channel called “The Limit,” which would bring the story of the fight between Phil Hill and Wolfgang von Trips for the 1961 F1 World Championship to the small screen. He calls it “sort of a ‘Mad Men’ in the racing world of the 1960s.”

“It’s hard, because not only do you want to bring the racing, but what do you want to show?” he said. “What’s the point of view? How do you get people to like racing who don’t like racing? In ‘Rush,’ for example, I was less interested in the racing as I was what was happening behind the scenes, and that’s what we’re focusing on.

Does anyone really want to win the 2014 IndyCar Series title? One thing is certain: Mid-Ohio magician Scott Dixon is heating up at the right time, writes John Oreovicz. Story

“Phil Hill and von Trips is an amazing story, the way it was at a specific time and place,” Dempsey continued. “Phil Hill [who won the ’61 title after his Ferrari teammate von Trips was killed during the Italian Grand Prix at Monza] has never really gotten his place in the sun. I think there are a lot of people who don’t really understand what he brought to racing, how smart he was. Really, really a fascinating man, along with the generation he came out of.”

In many ways, Dempsey is a throwback to racers of a bygone era, and not because the sport is a hobby for him. It’s not — he takes his driving career every bit as seriously as the acting career that pays the racing bills.

“I still, every time I get in a car to prepare for a start, I just love it,” he said. “Time stops, you’re completely present and there’s nothing else in the world I’d rather be doing. There’s a great Phil Hill quote where he says: ‘You’re really not racing your fellow competitor as much as you are racing something inside of yourself.’ That is so true.

“We talk in [‘Racing Le Mans’] about how there is a beautiful quality when you race in a multiple class situation,” he added. “I am not directly racing a Daytona Prototype or an LMPC car or a GT car, but I am working with them and we’re racing our own races. And there is a beautiful dialogue between those classes if done correctly. You want to know where they’re at, you want to work with them; you want to help their race, or you want to use them as a pick to get past your competitor.”

I don’t attend as many sports car races as I would like, but over the years, I’ve never heard a bad word about Patrick Dempsey or his driving. Like Newman and McQueen in their eras, he was a quiet professional who just wanted to be treated as another racer. In the racetrack environment, none of them put up airs or asked for special treatment.

Racing-industry people often talk about how genuinely friendly and personable Dempsey is, and he gave me a perfect example. Early in our conversation, I told him that I watched “Racing Le Mans” with my 8-year-old son, Patrick, who had urged me to tell the actor that he has the same name.

When we were wrapping up — a few minutes beyond our allotted time and after a wide-ranging and enjoyable conversation that covered a lot of topics — Dempsey wanted to tell me one more thing.

Actor Dempsey finds refuge in racing – ESPN added by B. Sarah on August 8, 2014
View all posts by B. Sarah →