A relative state of calm may have washed over the Associated Press Top 25, but that doesn’t mean the latest rankings come without controversy. ? ??

For the second straight week, Florida reigns supreme at No. 1 despite having two more losses than its next closest competitor, Wichita State. Despite the Shockers becoming the first team in a decade to finish the regular season undefeated, they again remain at No. 2 with 14 first-place votes.

No. 3 Arizona, which has righted the ship for four straight victories, edged closer to the Shockers, while Duke and Virginia round out the rest of the Top Five.

Here’s a look at how the rest of the Top 25 played out:

The biggest news obviously comes from the Shockers, whose 68-45 domination of Missouri State over the weekend capped off the undefeated campaign. It was a nice piece of symmetry for Gregg Marshall’s squad, which needed overtime to defeat the Bears the first time they played.?

This time around, there was no question about the result. Wichita State played its typical swarming, aggressive style of defense, getting out to an 18-point lead at the end of the first half and never looking back. The Shockers held Missouri State to just 31.4 percent shooting and won the rebound battle 43-25.?

More important than the individual stats, though, was the final tally. At 31-0, Wichita State is the first team since St. Joseph’s in 2004 to finish out a regular season without a loss.? 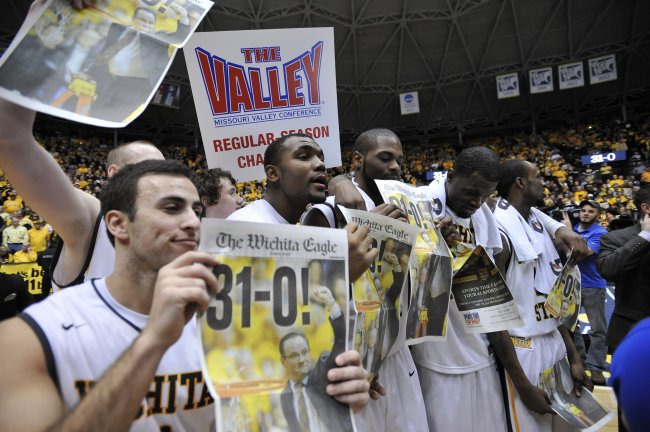 “It seems like the season started about three weeks ago as opposed to months ago,” Coach Marshall?told reporters. “It’s been incredible. They’ve met every challenge.”

As has been the pervading storyline throughout the regular season, though, the opinion stays fractured on the Shockers’ accomplishment. There are some who think they should be ahead of Florida for the No. 1 ranking. Being the only undefeated team and coming off a Final Four berth, it’s easy to see the logic.

Mark Ennis of ESPN was one of many to point out the “schedule strength” narrative is a bit overblown:

As UK was losing to S. Carolina, was hard not to think of the people so sure a dozen teams would go undefeated w/Wichita State’s schedule.

The Cavaliers in particular remain one of the nation’s most interesting teams. Like Miami last season, Virginia came into the 2013-14 campaign without much hype and walked away ACC champions. With 13 straight victories and a 16-1 record in the conference, the Cavaliers rank third in the nation in defensive efficiency and 30th offensively, per KenPom.com.

Tony Bennett’s latest victory was arguably the biggest of his career. Hosting a Syracuse squad that had opened the season with 25 straight victories, Virginia put together a sterling two-way game en route to a 75-56 romp.

A huge win for Virginia was just the latest sign of trouble for the Orange. Jim Boeheim and Co. have lost three of their last four games, dropping from the top of the rankings to No. 7. They’ve had particular problems scoring. Even going back to the undefeated run, Syracuse hasn’t scored more than 61 points in more than a month. 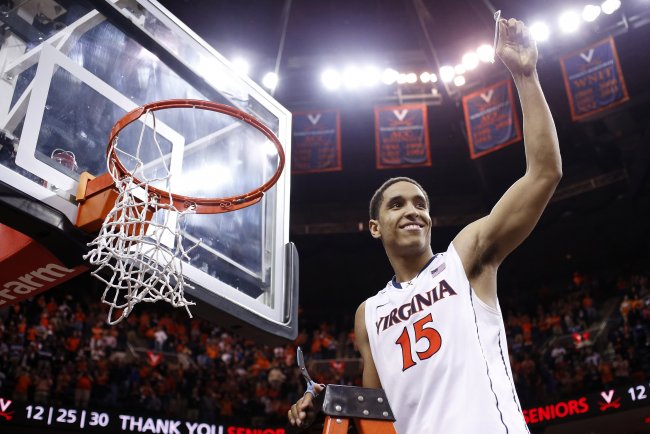 The Orange have two games remaining on their regular-season slate, both of which are winnable. They host Georgia Tech on Tuesday and then close out the season with a trip to Florida State. Nabbing a No. 1 seed is probably out of the question at this point, but impressing the committee is a must to stay within the realm of the No. 2s.

The same probably goes for Kansas, which saw its outside chance at a top seed go up in flames over the weekend. With Marcus Smart back in the fold and dropping 20 of his 21 points in the second half, Oklahoma State likely locked itself into the Big Dance with a 72-65 upset victory in Stillwater.?

Kansas still easily clinched the Big 12 regular-season title, its 10th straight, but has struggled with consistency all season. The Jayhawks got only 15 points out of Andrew Wiggins, who shot 5-of-16 from the field and turned the ball over six times.

“What’s frustrating to me is we had the game where we wanted it and then we didn’t make competitive plays down the stretch to give us the best chance to win,” coach Bill Self told reporters after the game.

It was a big week overall for teams with massive red flags. Like Kansas, Kentucky finds itself at something of a crossroads thanks to disappointing freshmen performances.

The Wildcats dropped two straight games last week to unranked opponents, falling to Arkansas in overtime on Thursday and South Carolina on Saturday. Aaron Harrison and Julius Randle shot a combined 5-of-23 against the Gamecocks, who held Kentucky to just 26.9 percent shooting overall. Coach John Calipari skipped out on his postgame interview Saturday, minutes after being thrown out after arguing a questionable series of calls. 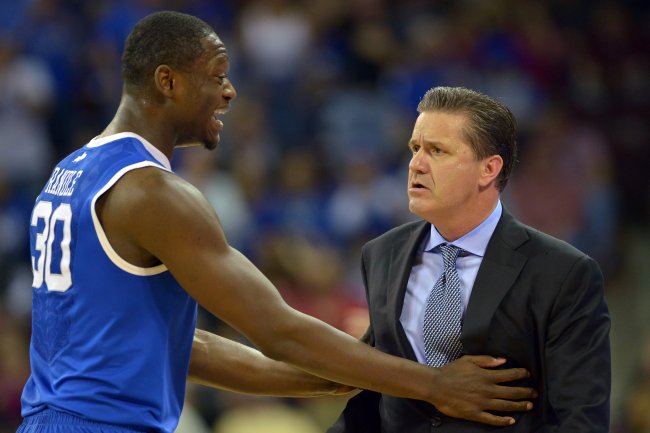 “I wish I didn’t get thrown out of the game, so that I could fight with our team,”?Calipari later told reporters. “We have a short turnaround to prepare for Alabama so we have to get back in the gym Sunday and start working on getting better.”

Also continuing its downward spiral last week was Michigan State, which has now lost three of four following its 53-46 upset loss to Illinois. The Illini held Michigan State to just 18 second-half points in East Lansing, as the Spartans continued their run of inconsistent play. Tom Izzo’s squad has not won back-to-back games since mid-January.?

The 22nd-ranked Spartans are one of five teams (No. 11 Louisville, No. 13 Creighton, No. 15 Cincinnati and No. 24 Iowa) to drop four spots. Kentucky’s eight-place descent to No. 25 was the largest of this week, while Saint Louis moved back to No. 17 after a short stint in the Top 10.?Virginia at No. 5 (seven spots) had by far the biggest leap, with No. 9 Wisconsin, No. 14 North Carolina and No. 18 SMU each ascending five places.?

Moving into the rankings this week were two teams, highlighted by No. 19 Connecticut. The Huskies were buoyed by their 51-45 win over Cincinnati. Oklahoma also snuck in at No. 23. Ohio State and Texas both dropped out after disappointing stretches.?