Milliner suffered a high ankle sprain, according to a league source. He’s expected to miss a few weeks, meaning his availability for the regular-season opener is in jeopardy.

McDougle will be lost for the season, as he tore the ACL in his left knee, the team announced. 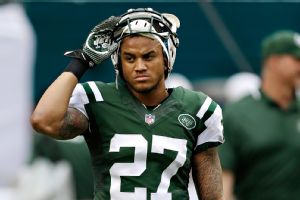 Milliner, the ninth overall pick in the 2013 draft, rolled his left ankle while defending rookie wide receiver Quincy Enunwa on a long pass. He fell to the ground and was in obvious pain, clutching his ankle.

Several hundred spectators fell silent as the trainers tended to Milliner, who made headlines recently by claiming he’s the best cornerback in the league. After a couple of minutes, Milliner was helped off the field by two trainers, unable to place any weight on the injured ankle.

Losing Milliner for a lengthy period would be a significant blow to the Jets’ defense, which is predicated on strong man-to-man coverage by the corners. They’re counting on him to be their No. 1 corner, which often means covering the opponent’s top receiver. The Jets face some of the NFL’s top quarterback-receiver combinations in the first two months of the season.

About 30 minutes before Milliner went down, McDougle — a third-round pick from Maryland — walked off under his own power. He caught a cleat in the grass while covering in a one-on-one drill in the red zone. He felt “a sharp pain” in his knee, according to coach Rex Ryan, who revealed Saturday that McDougle reported to camp overweight.

McDougle missed the final nine games for Maryland last season because of major shoulder surgery. Despite the inactivity, the Jets were hopeful he’d be able to push for playing time as a rookie.

Right now, the Jets are without three of their top four corners. Aside from Milliner and McDougle, who had taken some first-team reps in practice, starter Dimitri Patterson missed practice for the second straight day with calf and ankle injuries.

Patterson, coming off a shaky performance in the preseason opener, is expected to return soon. He said his injuries are “not serious.” But there’s concern because of his durability issues. Patterson, whom the Jets signed to a one-year, $3 million contract to replace Antonio Cromartie, has missed 33 games over the past three seasons.

Suddenly, the cornerback position — considered a strength in the years of Darrelle Revis and Cromartie — is a major issue. The Jets’ top healthy corners are nickelback Kyle Wilson, Darrin Walls and Ras-I Dowling.

“These kinds of situations, I’ve had to deal with them in the past,” Ryan said. “It’ll be adversity for some, opportunity for others. We’ll put the best 11 out there. We’ll be able to play defense. We’ve got a lot of good football players. We’ll be fine.”

The Jets were criticized for not signing one of the big-name cornerbacks in free agency. After releasing Cromartie for cap reasons, they made unsuccessful attempts to sign Dominique Rodgers-Cromartie and Vontae Davis. They also passed on Revis, who reportedly was interested in re-signing with the Jets after being released by the Tampa Bay Buccaneers.